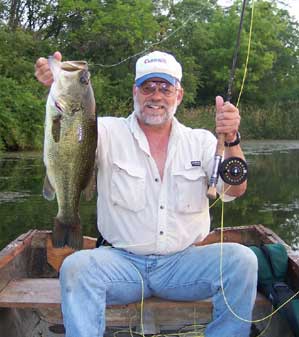 "In a recent discussion on the net, the subject of bass flies came up. When it got around to the Stealth Bomber I said I was a real fan and had taken my personal best bass on one. Steve from DP Poppers gave me the link to your site and suggested I drop you a note........I built my first one from a description given by a buddy who had seen one on TV. I came pretty close for never having seen one and it's fast become a favorite........ Remembering that Iowa is in "The Black Hole" of bass fishing and a five pounder is a good fish, here's a couple pics........The fish taken with the black bomber was 23 1/2" X 17 1/2"........Thanks for sharing a great fly."

And here's an excerpt from an email Duncan S. sent me recently about his success in saltwater with the Stealth Bomber -

"Thought I would pass along something I have learned as I have been trying to fish the inshore areas around Gulf Shores...at first I did like the books and magazines said, deceivers, clousers, etc.and I caught a lot of small trash fish... but no trout and no reds. One day ...the only floating fly I had down here was a pretty beat up Stealth Bomber so I tied it on and took off for the grass flats area.... into the deeper part of the water, let the fly land, rest a few seconds, gave it three quick strips and let is rest again, and wham, a 15 inch trout. Two cast later I caught a 24 inch trout. In the next hour, I had caught 5 trout, two of them in the 23 -24 inch range, and a small Red...What they seem to like best is a white bomber with gold flash with a strip and pause action...Anyway, I thought you would like to know that the Stealth Bomber is appreciated by Speckled Trout and Redfish as much as by freshwater Bass.

From an email from Byron -

"Jack and I went fishing on the lake all day yesterday.  I hurt my back the day before and didn't fish much.  At first the smallmouth bass were following our wooly buggers and not taking them.  We caught a couple.  Jack finally said he was going to try a stealth bomber.  He caught 3 smallmouth in four casts.  We would cast them out and twitch a couple of times.  Then we would watch as big smallmouth would rise and sip them off the surface.  Sometimes we would see cruising smallmouth in clear water.  We would cast in front of them and they would come up and sip the fly sometimes. Jack caught one that we think would have weighed 5 pounds but she had shed her eggs and weighed less.  We both saw one take his fly that looked to be around 7 pounds.  We caught some in the 3 pound class.  I spent most of the day sitting in the back, drinking beer, resting my back and trolling Jack around the lake.  We fished for 11 hours.  I caught 12.  Jack caught around 60.  It was one of the best days of fishing in my life.  I still can't believe it.  We were at the right place at the right time and Jack knew to try the Stealth Bomber.  ...Thanks Kent.

Earthworx on The Little River Outfitters Bulletin Board -

"......We came out of the river and turned north toward Cedar Key. I fished the Stealth Shrimp, again it was very productive. Three slot reds and the specs wouldn't stop. They destroyed the foam, but I kept casting. Please Help!! I didn't see them online for sale, if they are even for sale...."

There has probably been more written about that fly on our Message Board than any other.  The reason is, it works and it works very well.  My plan this winter is to tie Stealth Bombers in all sizes and colors to get ready for Spring bass fishing.

."...Been tying up a (edit)load of Stealth Bombers. It’s been my go to topwater for bass for the past year. It’s cheap, skates like Kerrigan (pre-Tonya), and comes in whatever color and style you create. Works great with a dropper. I like ‘em in size 6 or 8. White is my favorite color this time of year. Many thanks to Kent Edmonds for the creation of this little gem...."

".......Another great fly is called the Stealth Bomber; it is a foam fly that is tied slider style.   I use this fly for all species of fish that can be found in the Richmond area, catching everything from 3-4 in. long Bluegill in the office park ponds to 4+ lb. Smallmouth in the riffles....."

Warmouth3 on The Bass Pond Bulletin Board

And then here's some feedback from the shoal bass over on the Flint....the inset and the fly in the foreground evidence the response of the shoalies to this "FP" version of the Stealth. The fly at the top of the photo is how the lower fly started off - smooth foam and a double zonker strip for the tail. After a day with the shoal bass (and some red-breasts too), the foam is ragged and the rabbit zonker stripped almost to the hide. This may be the new version though, as the fish were still eating the pitiful little thing when we quit. ;) 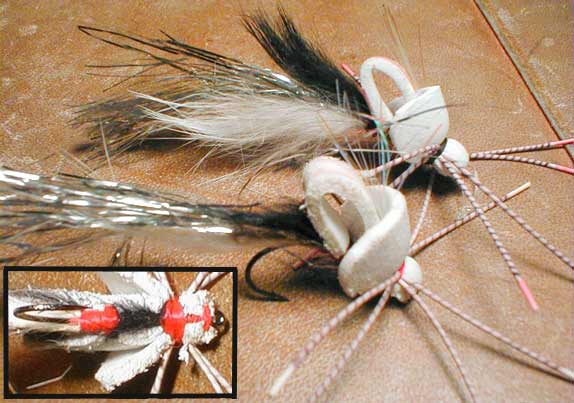